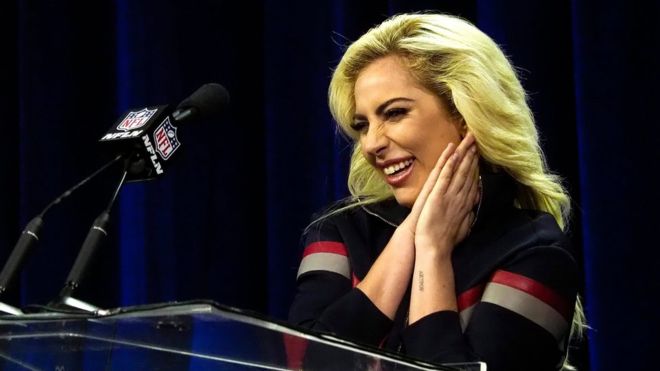 With a television audience of 110 million, it’s one of the biggest platforms in the world – and Gaga has been putting in the hours to ensure her set is suitably spectacular.

“We were [rehearsing] in the tent for about a week and a half, then we had to move to bigger studios in Hollywood where we are working on the rest of the show,” she told Houston radio station Mix 62.5.

“And then we will send that equipment to Houston where we will finish rehearsals. Fans can expect a performance that spans my career so far.”

1) MICHAEL JACKSON DOES NOTHING

Super Bowl performers get a very strict 12-minute time limit, so most performers cram their set with as much music as possible.

After shooting onto the stage at the Pasadena Rose Bowl, he stood completely still, staring at the world for a full 90 seconds. Ninety.

It was a master class in ratcheting expectation to a fever pitch. And the screams when he launched into Jam (not one of his best songs) proved he knew what he was doing.

Brilliantly, Jackson staged this entire performance while wearing a jacket it looked like he’d borrowed from Muammar Gaddafi.

Baby, he was born to run… and slide on his knees… and crotch slam a TV camera.

In his autobiography, The Boss explains the incident like this: “Too much adrenalin, a late drop, too much speed, here I come, Mike… BOOM!

“And I’m onto his camera, the lens implanted into my chest with one leg off the stage. I use his camera to push myself back up and… BLAM! BORN TO RUN!”

It led to the memorable headline: “America Attacked by Bruce Springsteen’s crotch” – but it didn’t stop the star delivering one of the most powerful and energetic Super Bowl shows in recent history. Even if they were fined for over-running by 40 seconds.

Coldplay were the headline act at last year’s Super Bowl in Santa Clara – but someone forgot to tell Beyonce.

She only performed one song, Formation, underscoring its message of black pride and power with back-up dancers dressed in leather body suits and black berets reminiscent of the Black Panthers movement.

Some of her dancers were even pictured holding up a sign declaring “Justice 4 Mario Woods” – a 26-year-old black man who was shot dead by armed police in San Francisco two months earlier.

The performance heralded the arrival of her unapologetic-ally political album, Lemonade, later in the year.

She raced through 10 songs and four costume changes in 12 minutes, then jumped into a helicopter and fled the stadium. Which is one way to beat the post-game traffic.

5) THE YEAR WHEN AN ELVIS IMPERSONATOR WAS THE STAR ATTRACTION

A magician named “Elvis Presto” burst out of a jukebox, before performing a series of conjuring tricks, aided by 2,000 part-time dancers, 102 custom Harley Davidson motorcycles and some of rock’s biggest classics.

At the culmination of the show, the “Prince of Prestidigitation” performed an interactive magic trick (“pick a card, concentrate real hard”) while viewers at home watched through 3D glasses.

It was cheesier than a wheel of brie – and prompted the NFL to adopt a more modern approach.

6) KATY PERRY UPSTAGED BY A SHARK

She arrived on a mechanical tiger, and departed on a shooting star – but Katy Perry couldn’t compete with the infamous “left shark”.

He was one of two foam-suited dancers flanking Katy while she performed Teenage Dream. While the one on the right was forgettable, the left shark flailed around in a desperate attempt to remember his dance moves.

It quickly became a viral sensation, spawning a whole range of merchandise from the ever-savvy pop star.

And when the half-time show was nominated for an Emmy, Katy made sure to thank her faithful friend.

Poor old Janet Jackson. She was at the end of a triumphant, hit-laden medley when Justin Timberlake ripped the front off her bodice, revealing a heavily-bejeweled super boob.

Few ever believed that the “wardrobe malfunction” was indeed a malfunction – but if you look at the photographs taken immediately after the event, Jackson appears mortified (notably, these were not the pictures printed by the press).

Nonetheless, America went apoplectic. The Federal Complaints Commission reportedly got more than 200,000 complaints, while Janet was blacklisted by MTV and radio. Her career never fully recovered.

But there is a bright side to this story. A PayPal employee called Jawed Karim missed the half-time show and grew frustrated that he couldn’t watch the incident online.

In response, he and his friends Steve Chen and Chad Hurley began coding a website where people could upload their own content. That site would end up being YouTube.

Ed Sheeran MAD at online opportunists who are selling tickets on his UK tour for up to £1,000 each!