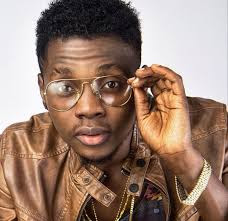 The G-Worldwide act, also talked about his label playing a smart one on him when it comes to splitting proceeds from shows and endorsement deals.

Read excerpts from the interview :

When was the first time you knew you wanted to become a singer?

I think I was about seven then. I used to write a lot and when my father noticed my passion, he encouraged me to do more of it. However, I started music professionally in 2014.

You had a great outing with your New Era album, what’s the greatest benefit you have derived from it?

I got an award to show that I had the best album of 2016 and that means a lot to me. It shows that my work did not go unnoticed. The album went viral and I got universal recognition which also makes me happy. I am glad I made the album because initially, I had doubts about its success. I thought it wouldn’t be a hit because I did not feature major players in the music industry. Thankfully, it came out well and the fans loved it.

Do you sometimes wish you featured some artistes on the album?

Yes, I definitely do. However, I believe that’s how God wanted it. It is now in the past and I am currently working on another album which would be released next year. I want to make sure that whenever I drop an album, it will be a resounding success.

I want to work with a lot of people and I’m still going to do that though I may not be able to tell you their names now.

Who are some of the people that influenced your sound?

I would say 9ice and 2face.

What are the major lessons being an artiste has taught you?

I’ve learnt to always keep my mouth shut and not to always talk like a fool. One must always be eager to listen instead of talking. Talking too much will get you in a lot of trouble.

Have you ever been tempted to lash out at some of your followers online who get rude and abusive?

I am not that kind of person. I tried it once but I realised it’s not in my nature to do that. People are fond of throwing shots at me but I just laugh about it and move on. I don’t know what the person is going through at that time. That individual may be frustrated and is looking for an avenue to vent his anger and I refuse to come down to the person’s level.

What inspired your song, Sin City?

It is a response to a lot of comments I had been seeing online. There was a time I won two different awards for the Best Newcomer category and some people said that I didn’t deserve it. That was why in Sin City, I said that it’s not like the other guys out there are not cool but I’m the one that was chosen. The organisers of the awards thought I deserved the award and I couldn’t have rejected their good gesture.

What’s your take on the prominence of boobs, butts and nudity in the entertainment industry?

It is needed as it gets some certain set of people interested in music. As a matter of fact, I know some people who watch videos of ladies twerking first thing every morning. There are some people who wouldn’t watch your videos if there are no ladies flaunting their bums in it and that would reduce your views and followership. For instance, most of the feedback I have gotten on my new music video, Duro, has been about the ladies in it.

What is your contribution to your label mate, Sugarboy’s forthcoming album?

We collaborated on two great songs in the album and I prayed for him too, which I believe is very important.

It was once speculated that you only get a little of your concert and endorsement fees while your label takes the lion share, how true is that?

All I know is that I have a lot of money. I am Kiss Daniel, nobody can put me in a box.

Davido may undergo another DNA Test to confirm child paternity

“Kiss Daniel’s Change of Name Doesn’t Absolve Him From…